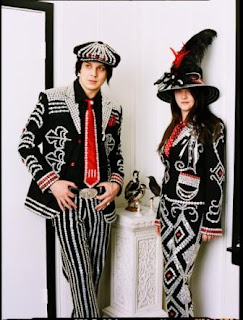 Last time I used this space to talk about a Chris Arnott blog entry, we were in disagreement. This time, I couldn't agree with Chris more.

In a recent post on his Arnott of the Arts blog, Chris wonders aloud about the lack of coverage received by The White Stripes in the Advocate, Play and the Register. Here's his money quote:

"So now I'm wondering ... either we all missed the
boat, and should have done more, or The White Stripes
is truly on the way down and few of us really care.
So are we oblivious, or is our relative inaction an
instinct, a prophesy? It's the kind of editorial
decision-making that keeps me up nights."

I struggled with the decision about how much to preview this show. I honestly struggled a lot. I've never been a White Stripes fan. I liked "Elephant" a lot, but I don't ever go back to that record anything. It's a band that just doesn't do much for me. With that said, I'll be at the show Wednesday at the Chevrolet Theatre.

I had a chance to interview the band, could have done up a big preview and ran it in Monday's Life/Style section or something. I chose not to. As an editor, it's one of my jobs to cherry-pick some shows that might not be getting much buzz, that I think are important (or whatever word you want to use) and highlight those. It's also my job to do everything I can to feature shows that are huge, that the public want to know about. For example, The Police aren't doing interviews with the Register about Monday's show, so I'll surely write a lot about this show in my Friday column.

The White Stripes show falls in the middle of this. I mean, it's surely getting covered and people know it's coming, but I also don't think enough people care to truly necessitate a full-blown feature. I declined an interview because of this. Maybe if the show was on the weekend, I would done something up, but it's not. And I didn't put anything in my column because I truly believe people need to know about Roger Clyne and the Peacemakers coming to Watertown tonight. That's an editorial decision. So I ran a photo and a blurb of the Stripes and called it a day.

Did I make the right decision? I'm not sure. I do know that "Icky Thump" has been pretty icky when it comes to sales, so I guess the duo's fan base is dwindling. Even though I don't listen to Jack and Meg, I can appreciate what they're trying to do. I just think the band is (now picture me affecting a California accent), so three years ago. 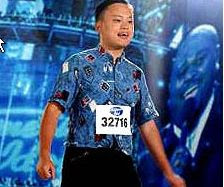 So I've never really seen "American Idol," but I know who William Hung, left, is. Who doesn't? He was in one of the best episodes of "Arrested Development" ever.

Anyway, this is a quick reminder that Mr. Hung will be appearing at Yale Field tonight during the New Haven County Cutters game. Oh yeah, it's also a Thirsty Thursday ($1 beers!).

I'll see you there. I'll be the one a little intoxicated singing the Hung Jury song from "A.D."
Posted by Pat Ferrucci at 11:25 AM No comments: Links to this post 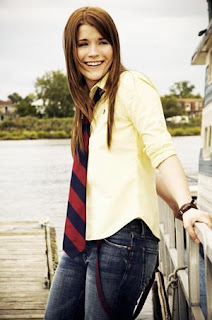 Jenny Owen Youngs has nothing in common with midgets. I really mean that. Even though the photo to the left of this paragraph is small, Jenny's somewhat tall. But I don't think she'd take offense with me putting her in a blog entry that also includes news about midget wrestling.

Actually, knowing how Jenny thinks, I bet she'd be as freaked about what went down at Yale Field as I am. In the previous two years that I've attended the Cutters' annual Midget Wrestling night, two little people have wrestled. Last night, Shortpants Sampson (I think that's his name) faced off against a non-little person ... and a woman. That's right, it was a tag match with Shortpants and some woman, against another dude and a woman.

It was a night to remember. I'll never forget it. But, I have to say it might be time to stop calling it Midget Wrestling, since, you know, that's not really what I saw. But the stadium was the most packed I'd ever seen it, except for that Bob Dylan show a few years back.

So what does this all have to do with Jenny Owen Youngs? Well, not much, except that I spoke with her recently because I was going to write something up before her show at Cafe Nine on July 28. Well, that show's not happening now. Jenny is opening for Aimee Mann in London, so she chose that option over Cafe Nine. I told her it was the wrong decision, but sometimes people feel the need to make the wrong decisions.

Anyway, Jenny is still set to play Daniel Street Sunday night, opening for The Alternate Routes. I've spent a lot of time writing about the Routes and you guys have probably seen them play already, if you go out to local shows. But Jenny, maybe you haven't seen her before.

A few years back, Jenny used to play The Space about every couple months. The venue's then booker, Chris Greenland, loved her music and would put her on bills. So in November of 2004, I got a press kit sent to me by Jenny. It was a, um, low budget kit that normally would have ended up on the bottom of my pile. But the cover letter was hysterical, so I listened to the disc, which was great. I did a little article on a show she was doing at The Space and had a heck of good time at that show.

Since then, Jenny's made a record, had that record re-released by Nettwerk Records, which is, of course, the home to many big artists like Sarah McLachlan. She's also become a favorite of gossip blogger Perez Hilton. Her songs have been on TV, which is the new radio, of course.

In short, all this is happening because Jenny's music is great. You should see her Sunday. She would like you for that. She would also like it if you bought her record. You could also buy it right at the show. OK, that's enough. See you Sunday.
Posted by Pat Ferrucci at 5:34 PM 1 comment: Links to this post

Holidays Mess With Me 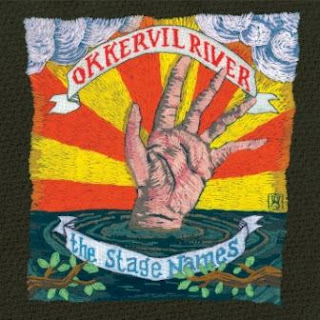 I hate holidays. Well, hate's a strong word and I really do love some holidays. But I don't like it when July 4 is in the middle of the week. I mean, my schedule's been real messed up because of it.

But now that the Fourth has passed, CDs are coming into my mailbox like crazy. Normally, that's a really good thing, but for the last week, it's been pretty hellish. Why, you ask?

Well, last week I came in on a day off just to pick up the upcoming Okkervil River CD, "The Stage Names," because I knew it had arrived. I was like a little kid on Christmas morning; I couldn't wait. I listened to the whole thing twice, almost immediately.

The Austin-based band is easily one of my favorite groups, so I just want to listen to the disc — which I totally love — over and over for the next month or so. But, alas, I have a job, and part of that job is to listen to dozens of CDs a week. So you're feeling my pain, right?

But this story gets more horrifying! I know, I can't believe it either.

On Monday, the upcoming matt pond PA disc, "Last Light," arrived. Again, this is one of my absolute favorite bands, and I don't have enough time to dedicate to both this CD and the Okkervil one, and all the others.

I don't know what to do; so I basically sit in a corner, in a ball, and cry myself to sleep. Then I tried listening to both at the same time, but that didn't work either. Although, a little cello makes Okkervil sound cool, and a little mandolin wouldn't hurt matt pond PA.

Anyway, I don't know why I'm sharing all of my biggest problems with you guys. I guess because you're my friends. I love you.

Keep in mind, though, it's only going to get worse as I expect discs from The New Pornographers and Rilo Kiley to arrive any minute now. If I end up dead somewhere, at least you'll know why.

In other news, tonight at Yale Field: midget wrestling and $1 drafts. Those two things go together better than coffee and sugar, or something good like that. I think the good guy's name is like Shortpants Sampson or something. Then they bring in a heel, too. But my friend Shayne hates Shortpants. I don't know why.

That's about all I've got for now. Look for some reviews and previews and everything else that you could ever want in tomorrow's Weekend. If don't see you, have a good one. I plan to.
Posted by Pat Ferrucci at 3:11 PM 1 comment: Links to this post