I'm in a video-posting mood today, I guess. Here's Will Sheff of Okkervil River performing two great songs, "The President's Dead" and "Plus Ones." As opposed to Rilo Kiley, Okkervil's new record is astoundingly good.

Posted by Pat Ferrucci at 1:39 PM No comments: Links to this post

Pilot Pen Is Over

OK, so the Pilot Pen has finally become a thing of the past. Some of you have probably been reading my daily columns in the paper about the tennis tournament. If you haven't, well, that's why I haven't updated my blog. I've been a busy boy.

Anyway, one of the things I've been thinking about recently is Rilo Kiley. I've been a big fan of the band for a long time now. I've personally converted a good amount of people into fans, but I just can't get past this new record. Some of it is really good, some of it is pathetically bad.

But what really bothers me is the marketing campaign. This video for "Silver Lining" really sums it up. Take a look.

My friend Georgia sent me the link and commented this: "It really gets on my nerves the way Rilo Kiley does things that make so much sense, and then everyone is like 'Wow, look how honest they are!' But it's all part of the sneaky RK marketing plan. This video makes me so mad. Jenny Lewis is conniving."

What do you think? 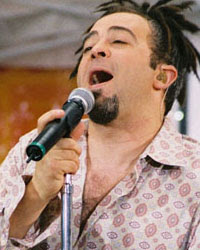 OK, OK, so the Counting Crows, Live and Collective Soul show over at New Britain Stadium on Saturday was way better than it had any right to be. Not only was the sound really good for an outside concert, but the bands were better than expected.

Live sounded really crisp, which was the biggest surprise of the night. The foursome might have played a bit too many newer, less-known songs, but everything was tight and energetic.

The real star of the show was Counting Crows, of course. I've seen the San Francisco-based band about seven or eight times live, but not since about 2002, so this was different. I have to say, too, that the band has never impressed me in concert, except for at a surprise gig at Lupo's in Providence sometime around 2000. That was a good show. Big stadiums, though, always seem to swallow up the Crows.

Not Saturday. It was like a real rock band was playing, with singer Adam Duritz actually flailing all over the stage, presumably very drunk, and a three-guitar attack filling the stadium with distortion. Anyway, here's the setlist:

"When I Dream of Michelangelo"
"Have You Seen Me Lately?"
"Recovering the Satellites"
"Mr. Jones"
"Perfect Blue Buildings"
"Mercury"
"All My Friends"
"Cowboys"
"Miami"
"Hard Candy"
"Come Around"
"A Long December"
"Hangingaround" (end of set)
"Washington Square"
"Time and Time Again"
"Insignificant"
"Holiday in Spain"

Notes: "Michelangelo," "Cowboys," "Come Around," "Washington Square" and "Insignificant" are new songs that will be on the band's upcoming "Saturday Nights, Sunday Mornings" double CD. "Miami" was performed very slowly, and while still good, not nearly as exciting as the original version. The only real clunker of the night was "Mercury," which went on for over 10 minutes and sucked the life out of the crowd. A major highlight was the playing of "All My Friends," a real overlooked gem from the "This Desert Life" record.

Posted by Pat Ferrucci at 11:00 AM No comments: Links to this post 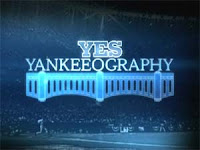 So my colleague Joe Amarante was complaining yesterday about how NESN has a show called "Walk Off Sox," a program dedicated to re-running old Red Sox games that feature dramatic comebacks.

In some ways, he's right to mock such a show, especially considering this year's Red Sox have only two ninth-inning wins. But, you know, yesterday I could have sworn I saw a "Yankeeography" on Miguel Cairo.
Posted by Pat Ferrucci at 12:28 PM No comments: Links to this post

What I Did During My Vacation 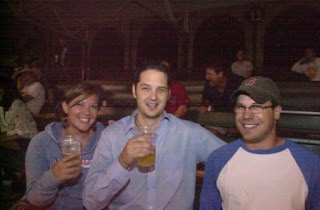 I pretty much already told you the answer to the headline above, but here's one thing I forgot: I went to some Thirsty Thursdays at Yale Field. At one of them, my photo was taken for Play Magazine's Gettin' Some feature.

I was taking advantage of Thirsty Thursday a little too much, and forgot about this. So now my photo is in there. Let's make one thing clear: Unfortunately, I'm not "getting any" in the photo, so it seems like it shouldn't be in this section. Anyway, pictured are, from left, friends Stefanie Harris, Harris McCabe and me.

When I saw Play this afternoon, I couldn't help but wish my first name was McCabe. Then the cutline to the photo would have looked like this: "Stefanie Harris, Harris McCabe, McCabe Ferrucci."

I guess it wasn't meant to be. At least this way I can make a lame joke.
Posted by Pat Ferrucci at 4:58 PM No comments: Links to this post

Welcome Back To Me

So I am a horrible blogger and friend. You'd think with two weeks, I would have gotten off my butt at least once and updated this here site. Of course, you'd be wrong then.

Well, I'm back. I would say that hopefully now I'll be updating every day or at least five times a week or something, but I don't want to write any lies. I took a look back, since May I've been relatively pathetic with updates. It's my August resolution to be better. You might not believe it, but give me a try!

OK, so what did I do for two weeks? That's a great question. You know how when most people come back from vacation they say it felt like two days or something? My vacation felt like two months. I honestly couldn't wait to get back here. I did do a whole lot, though. In fact, I feel like I lived a lifetime in my two weeks.

So, since we last spoke:

I think that may be it. I know I did a lot more, but you'll have to wait for Friday's column for specifics. Is that OK?

In other news, why is Cal Ripken qualified for this?

I didn't know people still knew who Chris Tucker and Jackie Chan were.

I'm about done now. Let's talk tomorrow. Keep my softball team in your prayers this afternoon.

Posted by Pat Ferrucci at 1:44 PM No comments: Links to this post